Joseph faced a dilemma. He loved his fiancé, but had discovered she was expecting a baby that was not his child. While deciding how to pragmatically handle the situation, an angel of the Lord appeared to him in a dream. The angel revealed the facts about the true nature of the situation and gave instructions that helped him cope with the shock of Mary’s pregnancy.

MATTHEW 1:20-23
“’Joseph, son of David, do not be afraid to take to you Mary your wife, for that which is conceived in her is of the Holy Spirit. And she will bring forth a Son, and you shall call His name Jesus, for He will save His people from their sins.’

All this was done that it might be fulfilled which was spoken by the Lord through the prophet, saying: ‘behold, the virgin shall be with child, and bear a Son, and they shall call His name Immanuel.’”

The name, Immanuel, means “God with us” and not only revealed how Joseph should respond to this unanticipated development, but also provides all seekers with the key to understanding the unique essence of Jesus.

Mary’s Child Was Not Merely Mortal
In his announcement to Joseph, the angel stressed the fact that Mary’s child would not be a mere mortal baby, but a Child that possessed both human and divine attributes— God Incarnate!

Although impossible to grasp with the limited faculties of our finite minds, Jesus had to possess a complete divine nature as well as a flawless human nature. How this is possible is one of the greatest mysteries known to man.

The theological term “hypostatic union” describes the paradox. “Hypostatic” derives from the Greek word ὑπόστασις (hupostasis) conveying the idea of actual substance or essence. In this case, the essence involves the perfect union of two distinct natures—one human, one divine—in a single person.

Jesus’ humanity did not diminish His deity. And, His deity in no way invalidated His humanity. The hypostatic union is a staggering concept. The late John Walvoord explains,

“This union should not be defined as deity possessing humanity as this would deny true humanity its rightful place. It is not, on the other hand, humanity merely indwelt by deity. In His unique personality He possessed two natures, one eternal and divine, the other human and generated in time.” (1)

Allowing the divine nature to function within the confines of finite humanity did not require relinquishing a single divine attribute. What it did require was giving up the independent exercise of those divine attributes. Jesus Himself articulated this unique dynamic saying,

Even though all divine attributes were available to Him throughout the course of His earthly ministry, Jesus lived in complete surrender never using them unless expressly directed by the Father, which is a mind-blowing reality!

The humble surroundings of the obscure environs of Bethlehem demonstrated our Lord’s willingness to submit to the limitations and frailty of human experience. (Mic. 5:2). 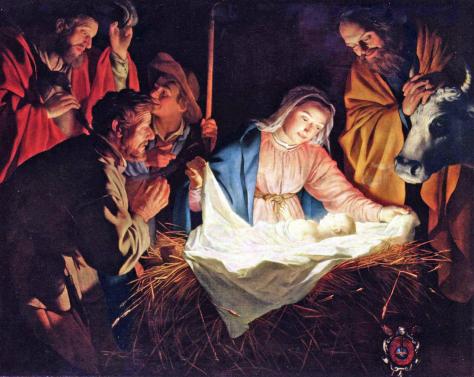 What an awesome privilege it is to be alive at this point in history looking back on God’s promised set time that made redemption available to the whole world (Gal. 4:4). As Christians, we not only have freedom to publically declare our faith in Jesus, Immanuel—the God-Man, Himself gave us the mandate to share the Good News (Acts 1:8).

Be a vibrant testimony of the wonderful truth encapsulated in the angel’s message to Joseph. Don’t let the day pass without telling someone! The Christmas season is the perfect time to demonstrate bold faith!