When was Jesus born? Today, there is raging debate within Christendom regarding the date we celebrate our Lord’s birth, if at all. Speculation abounds.

The truth of the matter is that the precise date of the Nativity is not detailed in Scripture. Since Jewish culture regards an individual’s birthday as less significant than one’s death anniversary, the New Testament’s silence on the matter can be assumed.

Bible scholars place the year of our Lord’s birth between 7 BC – 3 BC. There are, however, considerations about the calendar day that are worth exploring.

Contemporary scholars along with those of past generations propose a range of dates that span the Jewish holiday calendar from the 1st of Nisan, the beginning of the religious Jewish New Year, to Sukkot (Tabernacles) in the fall and even Chanukah (Feast of Dedication) in winter.

Two of the most compelling possibilities fall within the parameters of facts documented in Scripture. (1) Both use the angel Gabriel’s announcement to Zacharias as the starting point for arriving at a calendar date (Lk. 1:5-25).

There were 24 such groups in the sequence associated with temple service. The course of Abijah was the eighth. Each course would serve one week during the first six months of the year and another during the second half of the year. All priests served in the temple during the pilgrimage feasts of Pesach (Passover), Shavuot (Pentecost) and Sukkot (Tabernacles).

Did the Nativity Occur On Sukkot?

In recent years, the possibility that the Nativity occurred on the first day of Sukkot has been popularized based on an understanding that the angel Gabriel appeared to Zecharias during his first tour of duty at the temple in Jerusalem.

Because all priests served during the pilgrimage festivals of Pesach and Shavuot, the Abijah course would have served during the 10th week of the year beginning on the second Shabbat of the month Sivan (May/June). Using this timeline, Elizabeth would have conceived shortly thereafter and John would have then been born in close proximity to Passover.

Because the Bible states that Gabriel appeared to Mary during the sixth month of Elizabeth’s pregnancy, the timing for the conception of Jesus could have occurred in proximity to Chanukah in the month of Kislev falling in November/December (Lk. 1:36). Interestingly, the celebration of Chanukah, which is also referred to as the “Festival of Lights” adds credence to the argument (Jn. 8:1-12).

John the Baptist’s birth in the month Nissan (March/April) would place Jesus’ birth six months later during the month of Tishrei (September/October) when Sukkot  is celebrated. If Jesus was born on the first day of Sukkot, He would have been circumcised eight days later on Simchat Torah, the day the annual cycle of Torah reading is completed and a new cycle begins. In that case, the symbolism suggests that He had come to fulfill the Law and the Prophets (Mt. 5:17-20).

Some incidental considerations also may suggest the possibility of the Nativity on Sukkot. The Gospel of John declares:

And the Word became flesh and dwelt among us, and we beheld His glory, the glory as of the only begotten of the Father, full of grace and truth (Jn. 1:14).

The word translated “dwelt” (Greek: eskenosen) denotes a temporary dwelling. It is the word used in the Septuagint (the Greek rendition of the Hebrew Scriptures) to translate the Hebrew word for “tabernacle.” Literally, the passage reads, “And the Word became flesh and tabernacled among us” (v. 14).

When the angel announced Messiah’s birth to the shepherds, he said,

Do not be afraid, for behold, I bring you good tidings of great joy which will be to all people. For there is born to you this day in the city of David a Savior, who is Christ the Lord (Lk. 2:10-11).

The greeting was consistent with the joy associated with Sukkot, but given to the whole world. Notably, the prophet Zechariah informs that all the nations of the world will celebrate Sukkot in the Messianic Kingdom (Zech. 14:16).

If Jesus was indeed born on Sukkot, the nations of the world will celebrate the birth of our Lord and Savior perpetually during the Feast of Tabernacles in the Millennium. 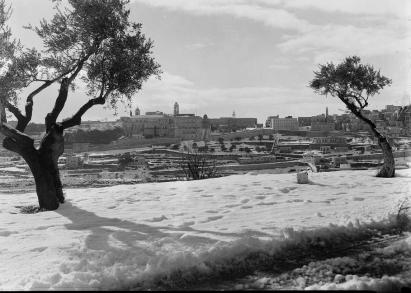 Snowy Bethlehem with Church of the Nativity in view. (1941)_Matson Collection

Almond tree in the snow north of Bethlehem_By Todd BolenBiblePlaces.com

Did the Nativity Occur On December 25th?

A persistent argument against the traditional date for Christmas on December 25th is that the celebration was derived from the pagan holiday, Sol Invictus (Invincible Sun), that was widely observed in the Roman Empire. Some scholars cite Emperor Aurelian’s institution of Sol Invictus, as proof. This commonly held belief lacks a solid historical foundation and has gone largely unchallenged by Bible teachers and pastors.

In using December 25th, Emperor Aurelian created, “a pagan alternative to a date that was already of some significance to Roman Christians,” in AD 274. (2) In plain words, Christians were already celebrating the Lord’s birth on December 25th when Aurelian issued the decree. His intent was to destroy the Christian celebration through assimilation into the pagan calendar. Instead, he officially confirmed the date of the Nativity as celebrated up to the present.

Further, when Hippolytus—a presbyter or leader of the church in Rome—wrote his commentary on the book of Daniel in approximately AD 202 – AD 211, he noted December 25 as the date associated with Jesus’ birth. Written beside the date was the notation referencing Nisan (March/April), which is a remarkable clue we will examine momentarily. (3)

As noted earlier, Zacharias would have served during the month Iyyar (April/May) and again 24 weeks later during the month of Tishrei (September/October). While I hesitate to include John Chrysostom because of his blatant anti-Semitism, he and other scholars cite that Zacharias may have served in the temple during Yom Kippur in 4 BC. (4)

The Gospel of Luke records,

Now in the sixth month [of Elizabeth’s pregnancy] the angel Gabriel was sent by God to a city of Galilee named Nazareth, to a virgin betrothed to a man whose name was Joseph, of the house of David. The virgin’s name was Mary (Lk. 1:26-27).

The common argument against this time frame is that flocks would not be in the fields during the winter. That line of reasoning is not as logical as it first sounds as anyone with a livestock background will verify. It is an urban myth.

Most flocks spend the summer months at higher elevations in rugged terrain. During the winter months, shepherds bring their sheep closer to population areas to graze. The sheep would then have still been in the field in winter, but not in the wilderness.

If the flocks to which the apostle Luke refers were temple flocks, it is likely those sheep would have grazed in the fields near Bethlehem year round. Temple shepherds would have been on site during the night to watch and protect their flocks regardless of the time of year.

Another Nativity theory places Jesus’ birthday on the 1st of Nisan. The reasoning is that 1 Nisan as the beginning of the religious year is considered a time of new beginnings. Without question, the Incarnation represented a new beginning, not just for the Jewish people, but for the whole world.

The Incarnation did not in point of fact occur at Jesus birth. Rather, He “became flesh” nine months earlier at the moment of conception (Jn. 1:14). If Mary conceived on 1 Nisan, it is entirely possible that she gave birth to her firstborn son in close proximity to the date of December 25th on the Gregorian calendar.

Information from Alfred Edersheim, a Messianic Jewish Bible scholar who lived from 1825 -1889 is equally compelling. In his book entitled The Life and Times of Jesus the Messiah, he cites Jewish sources that suggest the date of our Lord’s birth may correspond to the 9th of Tevet that occurs in December/January. (5)

The 9th of Tevet has coincided with December 25 at regular intervals over the last two millennia and is somewhat mysterious. Listed as a fast day on the Jewish calendar in the Megilat Ta’anit (The Scroll of Fasts), an article published in 1983 attempts to explain.

. . . in one of the more curious turns of events in Jewish intellectual history, namely, the christological [sic] interpretation of a Jewish text by Jews. . . Abraham bar Hiyya (d. circa 1136) . . . wrote in 1122 that Jesus was born on December 25, which in the year of his birth fell on 9 Tebeth. In the light of Abraham bar Hiyya’s calculation, the aforementioned 19th century scholars concluded that the fast of 9 Tabeth commemorated the Hebrew birthday of Jesus! (6)

Here’s another important consideration. The fact that Christians around the world have celebrated the Nativity on the traditional date of December 25 for the past two thousand years is significant.

While Christendom may never agree on the exact day, safeguarding the celebration of our Lord’s birth has never been more critical. Quibbling over dates not only distracts from the message, but fuels the push to cancel Judeo-Christian culture.

What matters most is the historical reality that God sent His only begotten Son to redeem fallen humanity at the set time in His prophetic plan. Why not honor Christmas in your heart and keep the message alive throughout the year?