Christians rightly focus on the night Jesus was born. Without the foundation of the Old Testament, however, some conclude that the account of the Nativity began with Gabriel’s message to Mary. In reality, the young virgin’s reaction to the angelic announcement acknowledged millennia of prophetic preparation for the event.

LUKE 1:46, 55
And Mary said: “My soul magnifies the Lord, and my spirit has rejoiced in God my Savior. . . He has helped His servant Israel, in remembrance of His mercy, as He spoke to our fathers, to Abraham and to his seed forever.”

The Promise Given to Abraham Blesses the World
God established that the Redeemer would come through the nation of Israel as promised to Abraham (Gen. 12:3). The ultimate blessing the inhabitants of the world can experience is salvation through Messiah (Gal. 3:6-9).

At the end of his life, Abraham’s grandson, Jacob-Israel, blessed his fourth son, Judah, thereby confirming that the Redeemer would not only come through the people of Israel, but specifically through the line of the tribe of Judah (Gen. 49:10).

Next, the chosen lineage was revealed and reconfirmed in David’s heir, Solomon, to whom God said, “You shall not fail to have a man as ruler in Israel” (2 Chr. 7:18). The promise to Solomon was intertwined with God’s Messianic program. The Davidic Dynasty would be unending culminating in the Messiah.

The Promise to Mary Was Extraordinary
The angel Gabriel revealed the nature of the child that would be born to Mary.

“And behold, you will conceive in your womb and bring forth a Son, and shall call His name Jesus. He will be great, and will be called the Son of the Highest; and the Lord God will give Him the throne of His father David. And He will reign over the house of Jacob forever, and of His kingdom there will be no end” (Lk. 2:31-33).

Nearly 700 years earlier, Isaiah had prophesied that Messiah would be born of a virgin confirming that He would be no less than God:

Therefore the Lord Himself will give you a sign: Behold, the virgin shall conceive and bear a Son, and shall call His name Immanuel (Isa. 7:14, cf. 9:6). 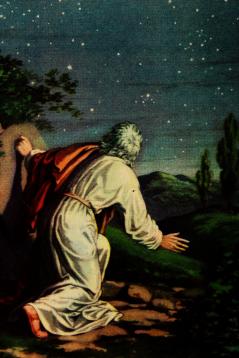 The Promise to Abraham 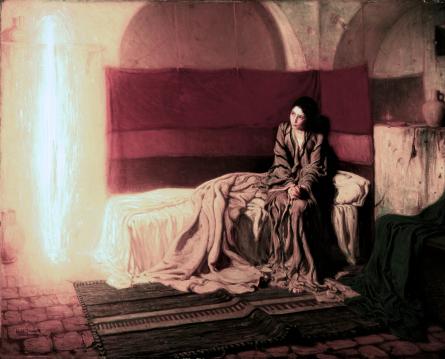 The Annunciation By Henry Ossawa Tanner

The Promised Birthplace Revealed Startling Details
Micah prophesied Messiah’s birthplace and pinpointed a specific location on the outskirts of Bethlehem as identified in chapter 4 verse eight of the book that bears his name.

But you, Bethlehem Ephrathah,
Though you are little among the thousands of Judah,
Yet out of you shall come forth to Me
The One to be Ruler in Israel,
Whose goings forth are from of old,
From everlasting (Mic. 5:2 cf. Mt. 2:6).

The eventuality of the Second Advent is assured by Malachi. How fitting that the last book of the Old Testament confirms the expectation of the coming of the Messenger of the covenant given to Abraham.

The Promise Was Fulfilled With Precision
Four hundred years later, Bethlehem was crowded as never before. Guesthouses were full as King David’s descendants converged on the village in compliance with the Roman government’s decree to register in the census. It was during this period of mandatory registration that God’s ancient promise became a reality.

On that glorious night, the genealogies establishing birthright, God’s covenants and prophecies given to Israel concerning the promised Savior converged in the birth of Jesus the Christ.

God celebrated the event with a spectacular announcement as the night sky suddenly exploded into dazzling light. An angel accompanied by the heavenly host proclaimed the Good News:

Do not be afraid, for behold, I bring you good tidings of great joy which shall be to all people. For there is born to you this day in the city of David [the] Savior, who is Christ the Lord (Lk. 2:11).

The Nativity was the culmination of critical events planned and choreographed by God that climaxed in the birth of His Son.

May we as people of faith declare with the psalmist, “Even from everlasting to everlasting, You are God” (Ps. 90:2). “Amen! Blessing and glory and wisdom, thanksgiving and honor and power and might, be to our God forever and ever. Amen” (Rev. 7:12).

God, who strategically planned every detailed event leading to the Incarnation and birth of our Savior, continues to intervene in world affairs to accomplish His purposes. No matter how uncertain or turbulent world circumstances may be, we can take heart in that fact today!