Grace is a word often used by Christians, but seldom fully understood. How would our lives change and opinions of others be altered if we truly grasped the implications of God’s amazing grace?

Grace is not unique to the New Testament, though some teach otherwise. In the Old Testament, the concept is most often conveyed with the Hebrew word, hesed (חֶסֶד) . Hesed is usually translated as “mercy” or “loving-kindness” denoting a steadfast or loyal love that persists in spite of the faults of another party.

Nothing, however, in the English language fully captures all that hesed communicates. The Greek word for grace, charis (χάρις), as found in the New Testament is usually defined as unmerited favor.

David humbly recognized God’s grace when he sat before the Lord in response to Nathan’s announcement of the Davidic Covenant, “Now what more can David say to You? For You, Lord God, know Your servant” (2 Sam.7: 20). With fervent gratitude, he acknowledged, “You are great, O Lord God, for there is none like You, nor is there any God besides You, according to all that we have heard with our ears” (v. 22).

God’s grace was even more profoundly revealed, however, in response to hidden sin that became shockingly public in the life of David.

Nathan the prophet conveyed God’s knowledge of the transgression with a question and restatement of the facts:

“Why have you despised the commandment of the Lord, to do evil in His sight? You have killed Uriah the Hittite with the sword; you have taken his wife to be your wife, and have killed him with the sword of the people of Ammon” (12:9).

Even a cursory look at David’s life reveals a man far from perfect. David is who he is—virtues as well as faults. The Bible doesn’t whitewash, camouflage or ignore his imperfections.

Nathan predicted the consequences of David and Bathsheba’s sin. They knew what lay in store (2 Sam. 12:14).

For seven days, they hovered over the newborn unable to escape the memory of what they had done. God was displeased with their actions. There were consequences. Tragically, their child died seven days after birth—just a day before naming and circumcision could be performed—as Nathan predicted.

It’s easy to focus on the tragedy of the circumstances they brought upon themselves. (2)

When we pull ourselves away from the remorse and sadness of this true-life story, it quickly becomes evident that while the details are instructive, the real message is the far-reaching power of God’s mercy and grace. 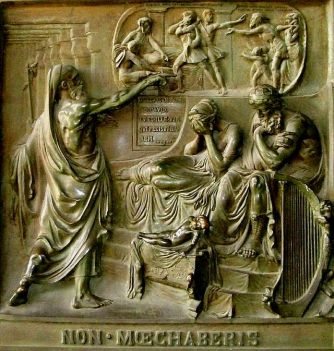 David’s repentance as recorded in the 51st Psalm demonstrates an intense awareness of God’s mercy as he prayed,

“Create in me a clean heart, O God, and renew a steadfast spirit within me. Do not cast me away from Your presence, and do not take Your Holy Spirit from me. Restore to me the joy of Your salvation, and uphold me by Your generous Spirit. Then I will teach transgressors Your ways, and sinners shall be converted to You” (Ps. 51:10-13).

David had nothing to offer in exchange for God’s forgiveness. He placed himself fully in the gracious hands of God.

God forgave the sin of David and Bathsheba. Nathan still warned of consequences set in motion by his actions, but David’s sin was forgiven—not partially, not conditionally, but completely (v. 13). By God’s grace, he and Bathsheba could experience the unsurpassed peace of forgiveness. If only more Christians could embrace that truth!

Shortly after the death of their newborn, Bathsheba conceived and gave birth to another son.

In the brief statement recording the birth of the child, we see the model of God’s mercy coupled with His sovereign grace.

The name communicates not only the peace of forgiven sin along with a restored relationship, but also suggests David and Bathsheba’s understanding that God had replaced the son taken from them as a consequence of their sin. The name Solomon stands as a testimony of God’s mercy and grace.

The fact that David and Bathsheba were blessed to continue their relationship as husband and wife is startling. That they were given another son is astounding. That their newborn was destined to be David’s successor who would build the temple and be the heir to the line of descent through whom Messiah would come is beyond human comprehension.

Read carefully what Scripture records on the occasion of Solomon’s birth:

This was not a grudging concession on God’s part. Nor was Solomon considered just another among the more than 20 sons in David’s household. God specifically loved Solomon!

Despite his parent’s shortcomings, Solomon was the son to whom God specifically expressed His love. The text concludes,

“and He [God] sent word by the hand of Nathan the prophet: So he [David] called his name Jedidiah, because of the Lord” (v.25).

There could not be a more definitive expression of God’s love for Solomon. Jedidiah combines the abbreviated name for Jehovah (Ya) with a form of David’s own name (dwd, transliterated Dowod), which means “beloved.” Combined, the name means “beloved of God” or “Jehovah’s beloved.” God identified Solomon as the son of promise—the son through whom the Davidic Covenant would be fulfilled—the next “David.”

Some wonder why the Bible consistently uses the name Solomon instead of Jedidiah. The specific name for the child originally given to David by God was Solomon (1 Chr. 22:9).

God shared the sentiment embodied in the name Jedidiah with David and Bathsheba primarily to underscore that their sin had been forgiven and that Solomon was the chosen successor to David’s eternal throne.

Considering all the information available to us in Scripture, it appears that the name “Solomon” was the regnal name used by the third king of Israel, while Jedidiah may have been a personal name used in the more intimate setting of the family.

Throughout biblical history God demonstrates that He delights in using the least likely individuals—from man’s perspective—to accomplish His purposes.

In spite of the circumstances that brought them together, David and Bathsheba’s son, Solomon, was destined to be next in succession in the lineage of Messiah.

The application we can take away is simple, yet profound.

God in His grace forgives completely. God honors a contrite heart and forgives those who come to Him in genuine repentance. The sooner, the better. But, it’s never too late. That’s the beauty of God’s amazing grace!

ENDNOTES:
1) Some assert that because David was king, Bathsheba was subject to him and therefore innocent in the affair. The Midrash (rabbinic commentary) describes Bathsheba as a modest woman who inadvertently became involved in an affair with the king. Since Scripture does not record Bathsheba’s petition for forgiveness, the Midrash concludes she is presumed innocent.

Other scholars teach that there was no indiscretion based on the argument that it was possible for soldiers to create a conditional document of divorce retroactive to the date of departure for battle. Thus, it may have been that Bathsheba was technically considered unmarried.

Uriah’s unwillingness to go to his wife as ordered by David lends some credence to the argument (2 Sam. 11:6-11). Generally presented as a virtuous and loyal servant of the king, it’s rare for Christians to question Uriah’s refusal to sleep with his beautiful wife (v. 2).

Was David solely responsible? Bathsheba’s rooftop bath in apparent close proximity to David’s palace may suggest otherwise. The topography between the royal residence and surrounding neighborhood is another overlooked consideration.

Scripture states that David recognized he had sinned. His confession when confronted by Nathan, his prayer recorded in the 51st Psalm and other factors demonstrate David’s recognition of sin and repentance (2 Sam. 12:13; Ps. 51:1-19).

In spite of how the affair played out, David rightly bore the responsibility for his actions.

2) Unfortunately, many pastors choose to highlight the consequences and give the impression that this sin was the endpoint of what would have otherwise been a remarkable life. David’s moral failure is often used to communicate that a stumble in the walk of faith will prevent you from achieving what God intended. The consequences did in point of fact make life more difficult for David. Because he genuinely repented, however, David was not disqualified from realizing his full destiny. The Davidic Covenant remains in effect (2 Sam. 7:16).