If Only Scarecrows Were Enough

Over the past 18 weeks, we witnessed focused media attention on the Palestinian-Arab March of Return protests on the Gaza border with Israel.

The “protests” have not, however, been peaceful as commonly reported. Videos and stills of the violence accompanying most commentary insinuate that Israel is to blame while ignoring the facts. “Protesters” have used slings to heave stones on Israeli security personnel, hurled Molotov cocktails at border installations, planted bombs along the border fence and paradoxically destroyed the Kerem Shalom border crossing where humanitarian aid from Israel enters Gaza.

An equally destructive scheme for perpetrating terror has also been ignored. Western news sources have not just failed to report, but seem unwilling to acknowledge the environmental terrorism and agro-terrorism targeting Israeli farmers. It little matters whether technologically advanced or simplistically utilitarian methods are used by terrorists. The outcomes for Israel are destructive and costly.

Almost 2,500 years ago, the psalmist described the animus that drives such acts.

“My soul has dwelt too long
With one who hates peace.

I am for peace;
But when I speak, they are for war.”

It is almost certain the psalmist referenced groups of squatters that claimed the land as their own while the population of Israel was exiled in Babylon (Ezra 4-6 cf. Nehemiah 1-13). In the aftermath, returning Jewish exiles were forced to contend with violent and unscrupulous intruders that illegally occupied the Jewish homeland. The trespassers were adamant in their bellicose defiance. The text plainly states that while ancient Israel pursued a peace plan, the squatter’s actions confirmed their hatred for peace (Ps. 120:6).

The psalmist laments, “I am for peace; but when I speak, they are for war” (v.7). Attempts to generate peaceful coexistence on the part of ancient Israel were met with obstinate refusal to cooperate. Squatters from neighboring lands were committed to hostility and any hope for peaceful resolution was blocked by their premeditated, continuous and unrelenting aggression. Read the accounts in Ezra and Nehemiah for yourself via the hyperlinks above.

Today, Israel’s neighboring enemies demonstrate the same hostile attitude described by the psalmist some 2500 years ago. A warring spirit drives both environmental and agro-terrorism and threatens the livelihood of Jewish farmers in Israel today. Terrorists show no regard for the land lovingly nurtured and reforested by God’s Chosen People over the past 70 years.

Wheat fields destroyed only days before harvest—orchards torched as fruit is beginning to ripen—vineyards cut-off at the root just prior to grape picking, along with the sabotage of agricultural equipment and farming implements—have cost Jewish farmers hundreds of thousands of shekels each in lost income. The attacks, however, are not limited to those originating in Gaza. In the biblical heartland of Judea and Samaria, farmers have been forced to contend with such assaults for five decades since the Six-Day War.

Did you know that on May 27 of this year, terrorists cut down over 1,000 grapevines in a vineyard near Shiloh? Owned by the neighbor of a friend of mine in the area, this vineyard has been pillaged six times in the last decade and was decimated along with others by agro-terrorist raids over the same weekend.

A year ago, terrorists breached the security of yet another neighbor destroying his entire vineyard of four-year old vines that would have yielded the first viable vintage. (1) The wanton destruction of thriving agriculture is a hateful act of environmental aggression. Sadly, these attacks happen routinely, but are not commonly known and are devastating to not just victims and surrounding communities, but the economy of Israel. 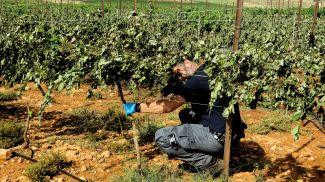 Maybe you saw video footage of fires in Israel? Scant attention was drawn to such attacks when terrorists recently launched an incendiary kite from Gaza that landed in a wheat field across from Sapir College near the city of Sderot. Combustible material ignited on impact and fire rapidly spread threatening the college campus as well as adjacent roads and residential neighborhoods. The Sapir fire was one of seven similar attacks that day.

According to Ynetnews, Israel Defense Minister Avigdor Lieberman cites that in the current wave of attacks, “600 such kites have been sent from the [Gaza] strip so far, while 400 have been intercepted by Israeli security forces using technological means. . . two-hundred succeeded . . . and they burned 9,000 dunams [more than 2,000 acres] of crops and forests.” (2)

Often I hear, “Why can’t they just agree to live in peace?”

Here is my response. There have been 13 significant attempts by Israel over a period of four decades to broker peace with Palestinian leaders who have adamantly refused to cooperate. The most generous offer—made at Camp David in 2000—was rejected by Yasser Arafat outright because the key clause in the treaty specified that signing the terms of the agreement meant the end of conflict.

As early as 1994, increased autonomy was granted to the Arab populations of Judea-Samaria for the sake of peace. Rather than engendering peace, however, suicide bombers and terrorist groups regularly infiltrated the border to attack Israeli citizens.

Disengagement from Gaza in 2005 forced Jewish residents completely out of Gaza. Instead of enjoying peaceful coexistence in the seven years following disengagement, more than 9,000 rockets were launched from Gaza at civilian targets in Israel. (3) That statistic does not include the 5,000-plus rockets fired at Israel since 2012. (4)

To commemorate Eid Al-Fitr which is the beginning of the end of Ramadan, Hamas announced plans to send 5,000 fire kites and balloons into Israel from Gaza claiming their payloads can reach up to 40 kilometers into Israel. The Times of Israel reported, “The use of 5,000 balloons and kites simultaneously would prove a major challenge for the army . . .” (5)

Can you imagine what it could mean for Israeli families, their homes, farms and communities if these articulated threats are realized? In a telling comment to Gazan border protestors, Hamas Chief Yahya Sinwar stated, “We have come here . . . to remind you that there is no peace with the enemy [Israel] and any attempt or plan will not compel us to make peace with them.” (6)

And, that’s the harsh reality. Israel is for peace; but they are for war. Rockets and mortars, stabbing intifada, incendiary kites, environmental and agro-terrorism—all demonstrate the same contempt for peace and the warmongering spirit that the psalmist described. If only scarecrows could deter hate.