The Anniversary of the Six Day War

For the citizens of the rebirthed nation not yet two decades old, the liberation and reunification of the Eternal City of Jerusalem was more than a military triumph. The Six Day War altered the course of history.

VOICES FROM THE PAST

Tasked with carrying out the internationally approved responsibility of monitoring the Egyptian-Israeli ceasefire following the Suez Crisis, the United Nations Emergency Force (UNEF) had been stationed at Sharm el-Sheikh since 1957.

On May 13, 1967, Egypt began moving troops into the Sinai, an area from which Israel had withdrawn some nine years earlier in a peace deal with the Egyptians. On May 18, President Abdul Nasser audaciously ordered the United Nations Emergency Force to remove personnel from the Sinai. In a disgraceful move, the UNEF complied.

That same night, the Voice of the Arabs (a transnational Arabic radio station) broadcast Nasser’s assertion.

As of today, there no longer exists an international emergency force to protect Israel. We shall exercise patience no more. We shall not complain any more to the UN about Israel. The sole method we shall apply against Israel is total war, which will result in the extermination of Zionist existence (1)

On May 22, at an Egyptian airbase in the Sinai, Nasser pronounced a blockade on Israeli shipping through the Suez Canal.

We shall on no account allow the Israeli flag to pass through the Gulf of Akaba. (2)

Our forces are now entirely ready not only to repulse the aggression, but to initiate the act of liberation itself, and to explode the Zionist presence in the Arab homeland. The Syrian army, with its finger on the trigger, is united. . . the time has come to enter into a battle of annihilation. (3)

Iraqi President Abdur Rahman Aref also weighed-in on May 31, 1967, “The existence of Israel is an error which must be rectified. . . Our goal is clear – to wipe Israel off the map.” (4)

With the Arab world clamoring for war, troops amassing on Israel’s borders and the Egyptian blockade of a major transportation link, Israeli Minister of Defense Moshe Dayan presented a plan to survive yet another intended war of annihilation.

Dayan urged Israel’s Unity Cabinet to act sooner than later. With cabinet approval, Minister of Defense Moshe Dayan and Prime Minister Levi Eshkol conferred and coordinated a preemptive attack to commence at 7:45 A.M. the next morning on Monday, June 5.

Scrambling remaining planes, Egypt, Syria and Jordan launched an air attack combined with a ground invasion along the northern, eastern and southern borders of Israel.

Israel had air superiority and a solid chance of repelling the invading armies which became a decisive factor in the final outcome of the war. Before the end of the first day, more than 400 enemy planes had been destroyed.

Although defending attacks from every side, a principal objective during the war was to secure the strategic stronghold of Sharm el-Sheikh at the southern tip of Sinai to secure the Straits of Tiran for Israeli shipping.

The plan was to take the fortress on June 7 using a combined airborne and naval assault. When it became obvious that a UN proposed cease-fire might indeed happen before the 7th, the timetable was accelerated. The naval force arrived before the other assault units and immediately reported, “there is no one here to fight!” (5)

The night before, the Egyptian army had given the order to fall back to the Suez Canal and Sharm el-Sheikh was evacuated. The stronghold was taken without a shot fired. The Sinai Peninsula was under Israeli control.

It was President Abdul Nasser who rejected the cease-fire resolution ordered by the United Nations Security Council. For the next 24 hours, he attempted to regain lost territory, but ultimately failed.

The liberation of the biblical heartland was among the unforeseen outcomes of Israel’s defensive Six-Day War. At the beginning of the war Prime Minister Eshkol assured Israel’s neighbors (Syria and Jordan),

We shall not attack any country unless it opens war on us. Even now, when the mortars speak, we have not given up our quest for peace. We strive to repel all menace of terrorism and any danger of aggression to ensure our security and our legitimate rights. (6)

When Jordan began shelling Jerusalem, King Hussein was urged by Israel to stay out of the conflict promising when,

the firing stopped and Jordan refrained from any other warlike acts . . . Israel would honor the armistice agreement [1949] with Jordan in its entirety. (7)

Instead, Hussein was influenced by Nasser who convinced him that combining forces with Egypt would guarantee destruction of the Zionist state.

The Syrians continued launching rockets and mortars on Galilee while moving tanks into position. Jordan began shelling Jerusalem and other points along the armistice lines while a convoy of tanks approached to support Jordanian troops fighting around Jerusalem.

By the end of the third day of fighting, Israel had stopped Jordanian tank advances and pushed the enemy army back to the Jordan River.

Since the beginning of the conflict, settlers in the Galilee had appealed to Moshe Dayan to authorize a military operation to secure the Golan Heights and end the nightmare reality of daily attacks from the Syrians.

Fearing possible reprisals if Russia came to the aid of the Syrians, Israel’s Ministerial Committee on Defense refused to issue the command. At 6:00 A.M. on the morning of June 9, however, Dayan had a change of heart.

Recognizing the disintegration of the Syrian defense as evidenced by soldiers fleeing their posts, Defense Minister Dayan issued an order to move into and defeat the Syrian army in the Golan Heights.

At 7:00 A.M. on June 7, Dayan gave orders for Israeli troops to liberate the Old City of Jerusalem. Later that morning, the Israeli army penetrated the Lion’s Gate and worked toward the Western Wall.

Col. Mordechai Gur’s field radio transmission reverberated throughout the State of Israel, “The Temple Mount is in our hands!”

By noon that same day, the Old City and the Temple Mount were liberated.

FROM OCCUPATION TO LIBERATION

The Jewish state had not only regained sovereignty over the biblical heartland of Israel, but had also liberated the entire city of Jerusalem including the Temple Mount.

Two men played a pivotal role in the aftermath of Jerusalem’s liberation on June 7, 1967. 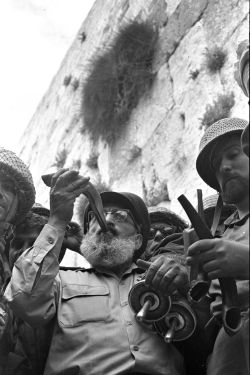 Carrying a Shofar and a Torah scroll, Rabbi Shlomo Goren, Chief Chaplain of the Israel Defense Forces, arrived at the Temple mount with IDF Chief of Staff Yitzak Rabin and Minister of Defense Moshe Dayan.

The Israeli flag was already flying from the Dome of the Rock when the IDF’s highest ranking religious leader blew the shofar signifying the liberation of the ancient city of Jerusalem.

“Blessed art Thou, O Lord our God, King of the universe, who has kept us in life, who has preserved us, and enabled us to reach this day.” This year in Jerusalem—rebuilt. (8)

Less than four hours after the Temple Mount was liberated, however, Moshe Dayan ordered the Israeli flag removed from the Dome of the Rock and commanded the liberating force to leave the Temple mount. One journalist stated the case, “This order initiated a schizophrenic diplomatic and political state of affairs that continues to this day.” (9) 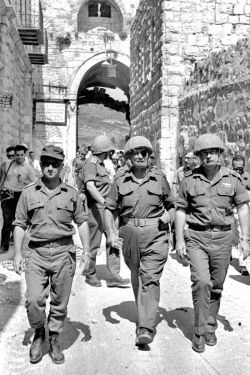 Chief of Staff Lt. Gen. Yitzhak Rabin in the entrance to the old city of Jerusalem during the Six Day War, with Moshe Dayan and Uzi Narkiss

This morning, the Israel Defense Forces liberated Jerusalem. We have united Jerusalem, the divided capital of Israel. We have returned to the holiest of our holy places, never to part from it again. To our Arab neighbors we extend, also at this hour—and with added emphasis at this hour—our hand in peace. And to our Christian and Muslim fellow citizens, we solemnly promise full religious freedom and rights. We did not come to Jerusalem for the sake of other peoples’ holy places, and not to interfere with the adherents of other faiths, but in order to safeguard its entirety, and to live there together with others, in unity. (10)

A few days later, in an equally confounding move, Dayan met with Mufti Saad al-Alami and Islamic leaders assuring Israeli protection of the area while offering to allow the Jordanian Wakf administrative control of the site.

Dayan’s move became the model for the status quo that persists to the present day; however, Israel’s sovereignty over the Temple Mount was never relinquished.

When a cease-fire was ordered at 6:30 P.M. on June 10, Israel regained the Golan Heights, the Sinai Peninsula, Gaza Strip, Judea and Samaria (“West Bank”) and the city of Jerusalem, including the Temple Mount.

For the first time in 19 years, Jewish people were able to enter the Old City of Jerusalem with access to the holiest and most revered sites in Israel—the Temple Mount and the Western Wall.

Despite offers of concessions to return land in exchange for recognition of Israel’s right to exist and guarantees of peaceful coexistence, two months later the Arab League adopted the Khartoum Resolution and the infamous “Three No’s” policy of, “No peace with Israel, No negotiations with Israel and No recognition of it [Israel].” (11)

When Israel officially annexed East Jerusalem on June 27, 1967, the Arab inhabitants were given special permanent resident status and the option to become Israeli citizens, which the majority rejected.

The truth as documented by the facts in recent history is inescapable. In a defensive war for survival, Israel pushed back persistent enemies obsessed with annihilation of the modern state of Israel and emerged triumphant in 1967.

In what few could have imagined as an unanticipated outcome, Israel regained not only the Golan Heights, but also the Gaza Strip, the “West Bank” and Jerusalem—all areas that were in-point-of-fact illegally occupied by Egypt and Jordan. (12)

Still facing voices bent on annihilation, let me suggest an appropriate verse to put the reality Israel faces into perspective.

As mortal beings, it’s impossible to foresee the outcome of events where the course of history is altered in a way we never anticipated. The anniversary of the Six Day War, however, stands not only as a testament of Israel’s determination and perseverance, but God’s preservation in spite of the calculated objective of past and present enemies.

On this day, stand in solidarity with the State of Israel and voice your support by declaring what history makes obvious. The city of Jerusalem is Israel’s indivisible capital.